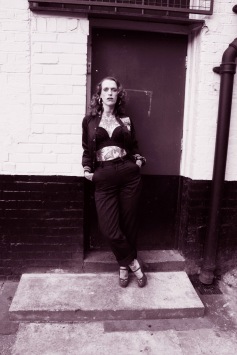 I used to go to Sunday school, every-bloody-week.

But I didn’t really care if Jesus wanted me for a sunbeam or not. The church was damp and smelled mouldy and it was too old to have a toilet. The pews were hard and the stone floor, stone cold.

I didn’t want to talk about how to be a Good Samaritan nor shake a tambourine. Instead, I spent hours colouring cheap photocopied pictures of Noah, Samson, Moses and Daniel-in-the-lions-den.

Mrs. Wall wasn’t too happy when I made Jesus Christ’s face a perfect shade of emerald green. Her wrinkled old mouth puckered and quivered when I proudly showed her the flat, dark fruits of my not-inconsiderable labour.
I’d coloured so intently, so completely, so willfully, that the felt tip had completely dried up. My relentless industry had rendered my tool useless, defunct, dead.

The spent marker pen pleased me, I carried it home in my pocket and gave it pride of place on my windowsill, next to a picture of Morten Harket (from A-ha) and my great-granddad’s WWI Death-Plaque.

Mrs. Wall told my mother that she thought I was disturbed.

I still had to go back to Sunday school though. Every-bloody-week.

Sometimes I prayed that Noah’s floods would come for me so that I wouldn’t have to ask Mrs. Wall to take me outside to wee over the drainage grate.